Registration for children entering Kindergarten at Cape Horn-Skye, Gause and Hathaway Elementary Schools will be held May 3-7, 2010 from 9:30 a.m. to 4:00 p.m. at the school where the child will attend. Children entering Kindergarten must be 5 years old on or before August 31, 2010. Parents must present the following for registration: 1) The child's original birth certificate 2) Proof of vaccinations 3) A completed and signed Certificate of Immunization Status (CIS) form. CIS forms are available from the school offices or may be downloaded in English or in Spanish here. For complete details on Kindergarten registration, click here.
Posted by Washougal School District at 12:32 PM

Canyon Creek Battle of the Books May 3, 2010
The big day is almost here! The Battle of the Books is a year long voluntary reading incentive for Canyon Creek Middle School Students and Cape Horn-Skye Fifth Graders. Students must read and verbally summarize 12 books from the list of 30 to participate on Battle Day. Book Battlers will be competing in preliminary Jeopardy/Knowledge Bowl type rounds all morning. The top two teams will challenge each other in the afternoon Grand Battle. Michael Piekarski will be serving up a special lunch for our Book Battlers. Kam Lawrence has arranged for some great mid-day entertainment. We are looking forward to lively competition and fun on Battle Day!

Update:  Reading is Out of this World
Canyon Creek Middle School hosted its second annual Battle of the Books on Monday, May 3rd. This year 31 students qualified to be in this all day event by reading at least 12 books from the list of 30. The team Federation Enterprise won first place in the Grand Battle. This team included 1 eighth-grader, two sixth-graders and two Cape Horn-Skye fifth- graders. Lunch was a delicious meal of hydroponic salad, light speed breadsticks and intergalactic ziti with asteroid meatballs. A fifth-grader won the airplane throw during the entertainment segment much to the delight of her team, Deep Space Nine. All six Book Battler teams had a great day of competition and fun.
Posted by Washougal School District at 12:36 PM 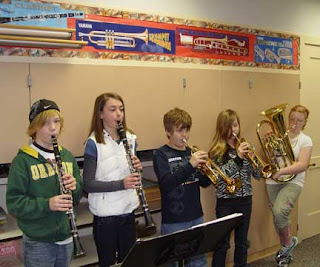 Hathaway Elementary School received several band instruments— two clarinets, two trumpets and one euphonium—as part of a grant from The Amphitheater at Clark County and the Mr. Holland’s Opus Foundation.

The donation was especially welcome during a time when many school districts are facing budget cuts for band programs and families are struggling with their budgets as well.

Sandee Canton is the fifth grade band teacher at Hathaway.