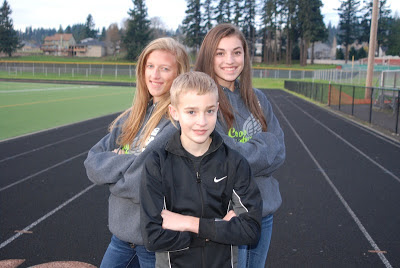 “Going to nationals is going to be exciting!” said Anderson.  “We have worked really hard so it will be rewarding to see that all this work has paid off.”

“I think it will be really challenging,” said Dinnel. “There will be people from all over the country there competing!”

So what inspires these young runners?  For each of them it is about doing their best, getting a personal record by beating a previous run time.   “My mom also inspires me. She is a great cross country and track runner,” said Miller.  “And I get inspiration by trying to be a great athlete to represent my school and town.”    Dinnel is also inspired by his family. His father competes in triathlons and he has an aunt who ran in the Boston Marathon.

The runners received an early taste of competitive running in the Washougal Schools Foundation Student Stride for Education.  The Stride, entering its tenth year, is a 5K fun run also offers student-length heats.  More than 600 runners attend the annual event at WHS in mid-May.  “Our family is grateful to the Foundation for this great event,” said Carol Dinnel. “We acknowledge how it has helped Gabriel to realize his running ability and encouraged him to run at a competitive level.”  In fact, Dinnel placed first at The Stride in his age group from kindergarten through 5th grade.  Anderson and Miller said they were also among the top girl finishers when they ran in The Stride.  The two high schoolers now participate as volunteer “rabbits,” running along with the younger students to provide encouragement and security.

Lately, the students have been putting many miles on their running shoes as they train for the national meet.  Anderson and Miller were teammates on the WHS Cross Country team that won the Greater St. Helens League Championship this season.  They still train together often, adding in some cross training.  “We work on strengthening our bodies and gaining muscle,” Anderson explained.  Dinnel trains by playing soccer, running with his parents and is also a part of a running club in Portland.

Cross country or any distance running takes a strong mind set.  “I think about pace,” said Miller.  “And if I see a person up ahead I tell myself I can pass that person. I set goals and challenges for myself.”  Anderson also likes to pick out runners she wants to pass but admits she goes faster when she is thinking about anything but running.  For Dinnel it is about focus.  “I just think about that finish line and about doing my best.”   The three runners are confident and focused as they prepare to head to New Mexico.  “I feel good.  I’m ready,” assures Miller.
Posted by Lester Brown at 1:25 PM

Several WHS band and choir students were recently accepted into the annual National Association for Music Educator's All-Northwest/All-State honor groups.  To be accepted, students must complete a rigorous audition process and compete against thousands of other applicants from Washington, Oregon, Idaho, Wyoming, Montana, and Alaska.  This is one of the highest honors a high school musician can receive.

Congratulations to these students on their achievement:

Rotary Scholar of the Month for November: Peter Linde

Peter Linde was selected as the Camas Washougal Rotary Scholar of the Month for November 2012.  Peter is a sophomore at Washougal High School and has a 3.9 GPA, taking AP and Honors courses.  Peter is a also a member of the WHS Wind Ensemble and Pep Band, with Kelly Ritter, WHS Band Teacher describing him as “a talented clarinet player.”  AP World History Teacher Ryan Isaacson says “Peter is intelligent, hardworking, but by far one of the most conscientious and caring students.”

WHS AP Literature Teacher Sheila Good adds that Peter "is really a sweet, positive student" and that he is "very committed to doing his best."  Rochelle Aiton, WHS Spanish Teacher, notes that "Peter quietly excels.  His persistent excellent, without pretense, is a model for other students and a joy to watch in class."

Peter is the son of Robert and Elizabeth Linde.  Congratulations, Peter!
Posted by Lester Brown at 9:08 AM

This fall, Washougal fifth graders began piloting an exciting project using iPads in their classrooms. Three classrooms (one at each elementary school) plus a group of special education students are taking part in this technology integration experiment into subjects including Science, Social Science and Language Arts.

In preparation for an all-new teaching and learning model, teachers Chelsea Meats, Erin Hayes, Erin Maier and Stephanie Closson received an intensive “boot camp” training over the summer and will continue to receive training and support throughout the year.

Classroom use varies by class and subject, depending on what students are studying at a given time. Teachers work with students to use iPad features, such as text-to-speech and built in word definitions and dictionaries that help students answer questions immediately. These tools have been particularly helpful for struggling learners and also help bridge the achievement gap between student groups. When asked the question, "How has the iPad changed the way you learn?" one student responded "We can do class activities together where we're all on the same website instead of just using one computer or having to share a few computers."

In Erin Maier’s class at Gause Elementary, students used the iPads to film themselves presenting to their peers. The students could then immediately review their work and answer questions such as “Did I speak clearly?” “That was huge in terms of helping them explain their thinking,” said Maier. “Hearing themselves speak helps with clarity of thought.”

Technology Director Les Brown says the project opens doors to new resources. “Technology can engage students in meaningful learning experiences where they research topics they are interested in, receive and give peer feedback, and carry their work through to completion or publication.”

Parents were included in the roll out process, with meetings were held at each school to define expectations and explain what the district hopes to gain through the project.

Curriculum Director David Tudor hopes the pilot will significantly impact student learning based on the experiences of other districts. “We anticipate seeing increases in student achievement particularly in Reading and Math, and especially among struggling students,” he said. “We’re hoping to see gains for special education students and students below grade level in reading.  We anticipate seeing lower attendance problems, fewer discipline referrals, and increased time on task.”

Maier says the devices have increase motivation and engagement in her classroom. “When we use the iPads, I automatically have 100 percent participation. This is their world and they are quick learners.”

District staff will measure the project’s success by comparing test score data between iPad and non-iPad classrooms to gauge the impact on student academic achievement.  Staff will also consider data on student attendance, discipline, and surveys on student/family perceptions about technology.
Posted by Lester Brown at 1:59 PM 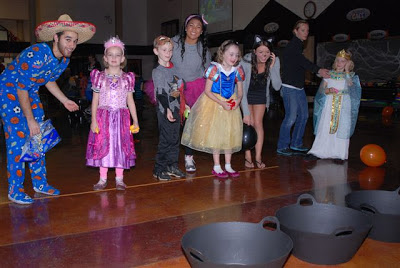 The idea for the event came from WHS senior and Interact member, Justice Rosales, who said he did not always have a safe place to trick-or-treat where he grew up in Corpus Christi, Texas. “Everyone agreed that creating a fun Halloween activity for the kids would help keep them safe and was a great way to give to our community.”

Completely student-run, the carnival took weeks of planning and work to find funds, supplies and volunteers, according to Joshua Banks, Interact Vice President and one of the Monster Mash organizers.  “It was a great success. We had lots of kids running around and having a great time,” he said.  “No one was looking bored!”  Key volunteers, in addition to Banks and Rosales, were seniors Jayden Janzter, Mike McElroy and club president, Liz Brice.  The club advisor is WHS social studies teacher, Ryan Isaacson.

“It is wonderful to see high school students involving themselves with our elementary school communities,” said Dawn Tarzian, Washougal School District Superintendent.  “Many of the Interact members attended these schools and that is where they began to develop the building blocks of being a good citizen. This event was a marvelous example of how the whole community wins when our student leaders step up and give back.”
Posted by Lester Brown at 1:59 PM