Second graders from Hathaway Elementary School had the chance to take a peak at people who helped shape the local community at the Two Rivers Heritage Museum on a field trip Thursday, June 11.  Groups of students stopped at several stations where museum docents would describe artifacts and stories of early residents. "This is a wonderful opportunity for students to get an appreciation for the local history and past community leaders," said Debbie Kramer, Hathaway second grade teacher. 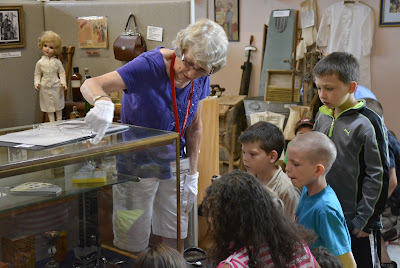 Donuts with Dad at Gause

Donuts and a good book were on the menu at the annual "Donuts with Dad" breakfast at Gause Elementary, Friday June 12.  The event is meant to encourage reading and create a special time with dads and their students.

"It is a lot of fun to be here," said Gause father, Zane Dillion, who was the guest of daughters Abby, kindergarten, and first grader Emma.  "And I love books," he added.   Dillion was reading poems from Shel Silverstein’s “Where the Sidewalk Ends,” captivating his young girls’ attention.  Daughter, Emma, also enjoyed the special morning and said, "I like the books and seeing everyone walk by with their dad."

The event, now in its fourth year, keeps getting bigger and has outgrown the library where it began and now packs the cafeteria.  The morning also featured drawings for books and prizes courtesy of the Gause Boosters. 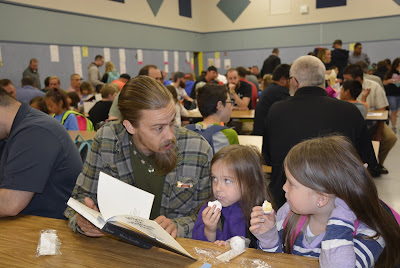 WHS junior Riley Coffman is an expert at time management. Not only does he currently have a 4.0 GPA, he also holds down a part-time job at Lutz Hardware in Camas, working approximately 16 hours per week. Riley is also a participant in the rigorous and highly competitive Washington Aerospace Scholars (WAS) program.  WAS is a two-part program for high school juniors focused on topics in science, technology, engineering and mathematics (STEM).

After successfully completing phase one of the WAS program (a five-month distance learning course designed in partnership with NASA and the University of Washington), Riley will attain five college credits through U.W. As one of the program’s top scorers with an overall grade of 88%, he has been invited to attend the summer phase two portion of this program, a six-day summer residency in Seattle working with Boeing and NASA engineers.

“Riley is a very self-driven individual that continues to amaze his father and myself every day,” said his mother, Jessica Coffman. “We are so proud of him, we are bursting at the seams.”

Riley says that good time management helps him juggle his busy schedule. “I just set priorities for myself and try to take everything in bite-sized chunks,” he said. “I do homework every night but I alternate the nights I work with nights I participate in WAS. I just take it one step at a time.”

Participating in WAS has sparked in interest in engineering for Riley, who thinks he may pursue a career in electrical or computer engineering. “I knew I wanted to do something with science and math,” he said. “But I now know that I love engineering.”

Riley says parental support was key to his success. “My parents played a big part in helping motivate me during stressful times,” he said. “It’s as much their success as it is mine. They’ve always been there to support me and to tell me it’s ok to have fun too.”

Riley currently has Mr. Bennett as a Physics teacher and Mr. Anderson for Pre-Calculus.
Posted by Lester Brown at 4:06 PM 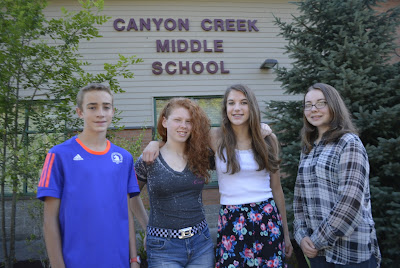 It is the Youth Commission’s belief that every young person has the potential for achievement in a number of categories including Arts, Career Development, Citizenship, Courage, Education, Environmental Stewardship, Family Life, Inspiration and Leadership.

CCMS students to be honored are Tori Corkum and Gabe Dinnel for demonstrating empathy towards others.  Rachel McDonald and Jasmyne Mason for art achievement. A third CCMS student also received recognition in art achievement but is unable to have her information shared in the media.

“I believe that everyone deserves respect,” said Corkum.  “I really had not seen myself as someone who was empathic but I try to be nice, even when people are angry.”  Soft spoken Dinnel agreed at the surprise that he was recognized for achievement in this area.  “I just don’t want to be rude and ignore people,” he said, pointing out that, “It can make people feel good to be talked to.”

McDonald, Mason and another student were awarded for their skill in the arts.  McDonald enjoys drawing realistic images and says she can take any photo and draw what she sees.  She has been drawing since age five, when her artwork appeared on cardboard boxes and walls at home.  She wants to pursue a career in graphic design.  Mason’s art specialty is anima and animal art.  She remembers drawing giraffes when she was just two years old.  “I’m not sure why I chose giraffes,” she said.  Now her preference is tigers.

The Youth Commission is a diverse group of 30 youth from throughout Clark County dedicated to bringing the voices of youth into the community and raising awareness about the remarkable achievements made by youth year round.  Awards will be presented to 300 area youth.
Posted by Lester Brown at 7:49 AM

Young Men in Action, sponsored and staffed by the Camas-Washougal Rotary Club, strives to promote positive behaviors by leading youth from problem behaviors.  The program allows boys an opportunity to interact with peers who are not in their circle of friends and focuses on development of life skills such as friendship, health, hygiene, careers and manners, while being fun and age-appropriate.

The boys and their male mentors met for 2 hours and concentrated on a different topic weekly for seven weeks. The curriculum included a field trips to such places such as Hearth Restaurant and the Washougal Fire Department and in-classroom instruction and conversations about mature behavior and choices. 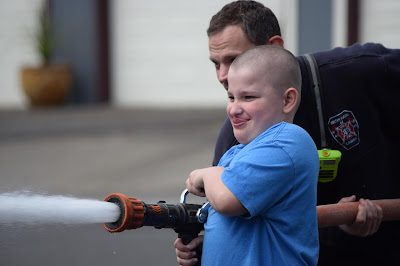 “Through the program we worked to show these boys that they have choices in how they react to others and to situations,” said Rotary member and YMIA mentor Blaine Peterson. “We hoped to demonstrate that the mentors have all had to make choices.  We made the right ones for us and now we have fulfilling and successful lives, and they too have the opportunity to make the right choices for themselves.”

In a thank you note to program volunteers, Hathaway fifth grader Gaerett Bailey said how grateful he was to his friends at Young Men in Action.  "I learned so much. Like how to have good hygiene and I learned to exercise more. Thank you for the checkbook.  I will use it to find a good job and a house.  I will miss you all."

This YMIA program recently concluded and was a natural fit for those Wednesday afternoons when school dismissed early and the boys had some free time to spend.  Young Men in Action and the companion program, Young Women in Action, are always looking for passionate, dedicated volunteers from the community. The programs are paid for by the Camas Washougal Rotary Club and are made possible with the help of local organizations who make donations, provide special pricing or facilitate field trips to their businesses.  Participation in Rotary is not a requirement to be part of the programs.

To get involved, visit cwrotary.com and click on the YMIA/YWIA link at the top of the page.

Washougal High School drama students recently took their original production, “The Fish and the Clam" or "Keep Clam and Be Yourshellf,” on the road to several Washougal schools.  A student-created show has been a part of the curriculum of the WHS Second Year Drama class for the past eleven years and is a capstone project for the young actors.

“Students start by submitting ideas at the beginning of the semester,” said WHS drama instructor, Kelly Gregersen.  “A premise is chosen and then they work at improvisation to get a feel for the flow of the show.  After that, I take everything that they have created and turn their ideas into a script.”

WHS junior, Krysia Woods said the process was fun. “We took the main idea and then acted out what were wanted our characters to say,” she explained.  “This way we could build in our own personalities into the characters.”

The play tells the story of Marlin, a fish who is not happy being a fish.  Thanks to a magical clam, he is able to try being other sea creatures but, in the end, finds that he is most happy to be himself.

Through Marlin’s transformation, the plot also explores the nature of cliques.  “The sharks are tough, the jelly fish are mellow, crabs are, well, crabby,” Gregersen said. “The moral of the story is really to be happy with who you are and that is it is ok to try new things but you don’t need to try to be something that you are not to do that.

According to Gregersen, this year’s half-hour production is particularly entertaining since it started off with a very streamlined idea and a strong focus.  “This show also plays well to both the younger and older students,” he said.  “We stuck every fish pun in the book into this thing.  And there is even some modern music snuck in.”  The clever script also incorporates comical references to popular movies such as “Finding Nemo” and Little Mermaid.”

“The drama students get so much out of this,” Gregersen explained.  “First, they get to see their ideas become a show.  It creates a very deep ownership for them.  And then they get to perform it to various audiences.  They put everything they have into the play.  These kids own this show and their parts.  And you can see it in the performances.” 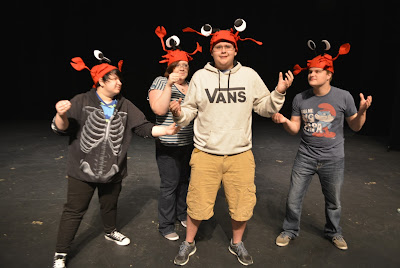 For senior Marshall Graham, the class production meant being able to have an additional theater experience that did not require the afterschool commitment that the larger productions have.  Graham, who played Kenickie in the Fall production of Grease, was not able to be a part of the Spring show due to his busy schedule.  He enjoyed the process to create an original script and said it was different to take a show on the road and perform in front of very young students.  “The children are a lot more energetic as an audience,” he said. “Sometimes they will laugh for minutes.  They really get into it.  Adults hold more in.”

Woods hopes that the play will not only send a powerful message to young students about being themselves, but will also help inspire them to look into the drama program at WHS.  “I did not have older students that I could look up to when I was their age,” she said.  “I hope we can have an impact on these kids.” 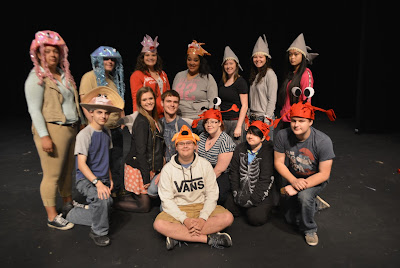