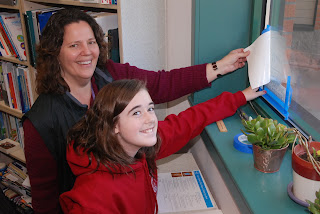 The Washougal School District has saved $379,000 in energy costs since beginning an energy saving program two years ago. Money saved from lowering costs has been used to support facility operations and fund future energy-saving measures throughout the district.  As a result of the program, Washougal High School, Canyon Creek Middle School and Cape Horn-Skye Elementary School have earned Energy Star certification.

Six of the seven Washougal schools are now eligible for Energy Star certification.  This will qualify the District as an Energy Star Leader, one of only 219 such school districts in the nation.  The U.S. Environmental Protection Agency’s (EPA’s) Energy Star certification signifies that buildings perform in the top 25 percent of similar facilities nationwide for energy efficiency and meet strict energy efficiency performance levels set by the EPA.
Washougal High School underwent a “building tune-up” that brought its Energy Star score from a 17 to an 85.  The EPA ranks school energy efficiency on a scale of 0–100, with 75 as a minimum passing score.  “The tune-up will bring significant utility savings over the next 10 years, and the cost of the improvements was paid for in utility savings the first year,” said Aaron Hansen, Washougal High School principal. “These improvements have also created a more comfortable learning environment here at school.”

Washougal School District contracted with ESD 112’s Construction Services Group, with Geert Aerts as Resource Conservation and Retro-Commissioning Manager, to oversee the improvements. They worked to tune up the buildings’ heating, cooling and ventilation systems and optimize the computer programming that controls the heating and cooling throughout the year.  “It’s very gratifying to see savings start just as budgets have shrunk,” said Aerts. “After all the buildings are tuned-up, the district will have saved $10 million over the next 20 years to invest in teachers, students and programs rather than on the energy costs.”

Canyon Creek Middle and Cape Horn-Skye Elementary Schools also received a tune-up.  “I like that we now use less heating energy over holidays and snow days, less lighting after school activities end and still make sure people are comfortable when using our building after hours,” said Sandi Christensen, Canyon Creek Middle School principal. “These changes to our computer control systems were a huge step in reducing energy waste and improving comfort.”

Commercial buildings that earn EPA’s Energy Star certification use an average of 35 percent less energy than typical buildings and also release 35 percent less carbon dioxide into the atmosphere.  "We hope the students and families see the Energy Star label on the buildings and know that we are working to lower energy costs and be a steward to the environment,” said Mary Lou Woody, Cape Horn-Skye Elementary principal.  “And the good news is no one needs to be too hot or too cold!  Everyone is just right!”
Posted by Lester Brown at 1:28 PM