Wells Fargo has committed $1,000 each to 10 Clark County schools, including Hathaway Elementary School in the Washougal School District.

The Wells Fargo executives handed out $1,000 ceremonial checks to educators, all of whom work at Washougal, Battle Ground and Vancouver and schools that have a large number of students from low-income families. It will be up to each principal to decide how to use the funds.

Callinsky explained to the group why Wells Fargo is such a strong supporter of education. “You can’t have a thriving company in a struggling community. And education is the base of a thriving community,” he said.
Dolley stressed how much Wells Fargo wants to support its local schools both financially and by providing financial education (through its free, online Hands on Banking program).  “We’d like to help you in any way, shape or form,” she said. “The hope is that we can build relationships so we can help more than just giving you $1,000.”

Dolley also asked the educators, many of whom have attended this event in prior years, to share what they had done with their previous grants. One school used its $1,000 Wells Fargo grant last year to create a program to develop good behavior. Another used its grant last year to buy school supplies and backpacks for all of its students.  One school used its previous grant to help upgrade equipment in every classroom. Another put the money in its emergency fund, which it taps whenever a student needs clothes or medications.

Founded in 1852, Wells Fargo has repeatedly been named one of the most generous firms in the nation. Education is one of the primary focus areas of its corporate giving. Wells Fargo employs more than 650 team members in Clark County. 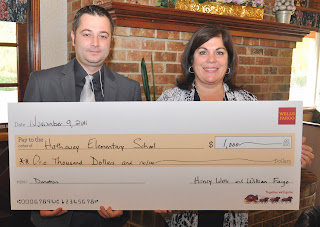